How to Manage and Release Excel files on GitHub: GitHub Actions (Part II)

It’s been a while since Part I of this blog post series. Part of the reason is that I wanted to wait with Part II until GitHub released their native continuous integration system called GitHub Actions. Well, that happened in November 2019 so it’s about time we get this moving!

We assume (very) basic Git knowledge here i.e. you should know how to commit and push a file to GitHub.

In Part I of this blog post series we learned a few best practices when managing your Excel files with Git. Two of the suggestions were:

We basically learned that we shouldn’t name our files in the mybook_v2_edits_Bob.xlsx style anymore but instead commit new versions of mybook.xlsx without any version description in the name. Git does the job for us and keeps track of the timestamp and author and we can use Git commit messages to describe (in much more detail) what changed.

We then moved on by saying that whenever we release a new version of our Excel tool, we should use Git to tag the repository so that we can go back anytime to the released state of the Excel workbook by doing a git checkout <tag>.

We also pointed out that if you would like to deploy your Excel file to your end users, you might want to re-introduce a version tag in the actual file name. The important part here is that this does not happen within Git as we follow the advise from above and never change the file to include something like _v1. Instead, you would take a copy of the file, rename it into mybook-1.0.0.xlsx outside of Git and finally upload it to the download or artifacts page of your Git provider. In GitHub, this is called “Releases”.

Now, and that’s where we left it in Part I of this blog post series, doing the rename/upload part manually works, but it’s very cumbersome and error prone. You could upload the wrong file, introduce typos or inconsistencies in the naming convention and you always have to remember to actually do it. Let’s see how we can fully automate all this!

Preview: What do we want to achieve?

Let’s have a quick look at what we’re trying to achieve here. We start by creating a new release on GitHub. To get there, click on x releases: 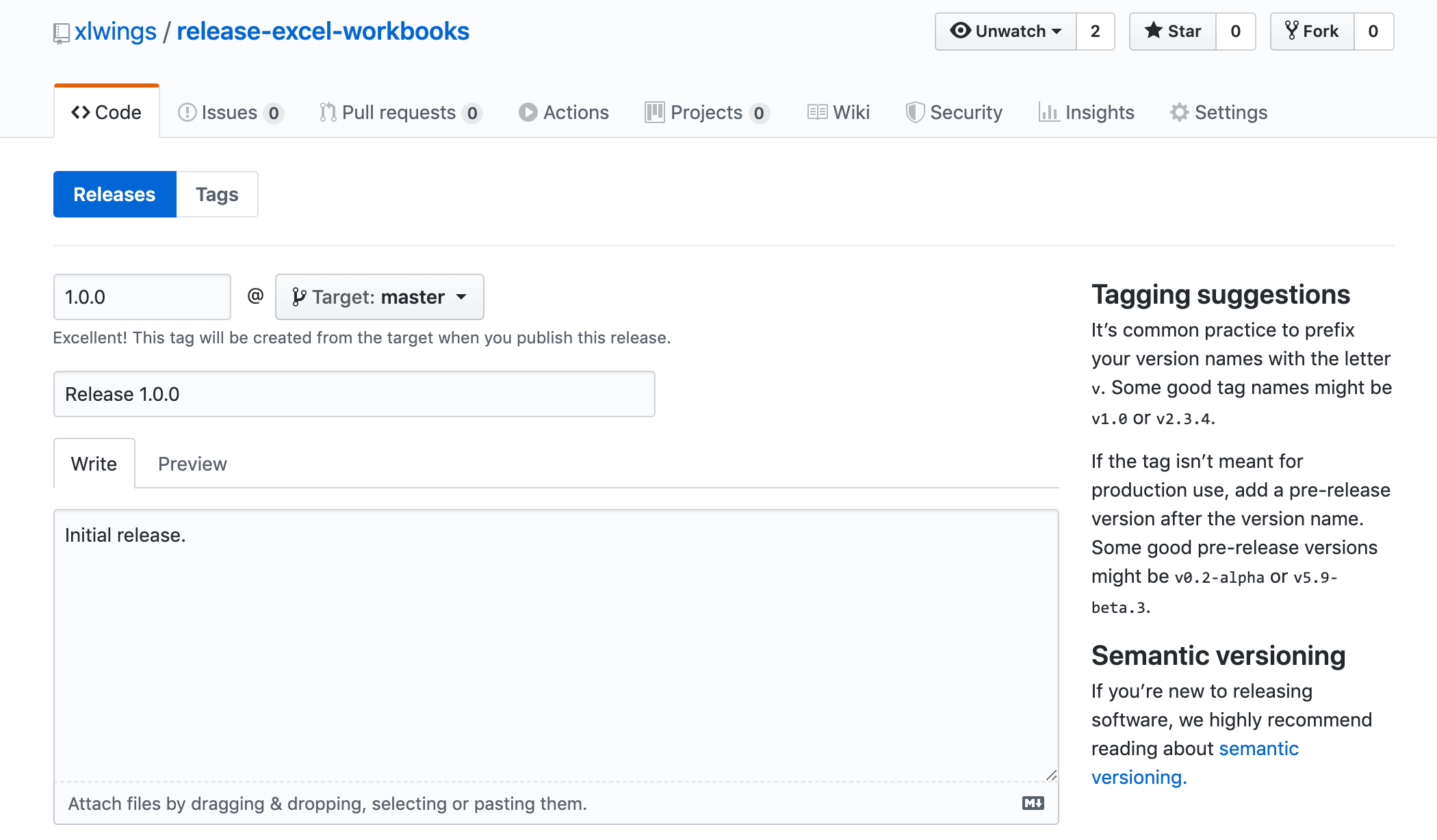 GitHub will automatically create a new Git tag when we click the green Publish Release button.

And here is the missing part: To finalize our release, we want the Excel file with the version tag in the name mybook-1.0.0.xlsx to magically appear as a downloadable file from the release page:

Let’s see how we get this to work!

As GitHub describes it: “GitHub Actions makes it easy to automate all your software workflows”. While GitHub Actions is a relatively new addition to the GitHub platform, is has been around for years with other vendors (GitLab and Bitbucket call them Pipelines) and even before GitHub Actions it was easy enough to use a 3rd party service that could be integrated with GitHub. More generally, the concept is known as continuous integration/continuous deployment.

So what does GitHub Actions do? Github Actions is basically a script that automatically runs whenever something happens in your Git repo (most commonly when you push a new commit). GitHub Actions is free for open-source repos and private repos have a generous allowance of free build minutes. It’s also very nice that you can choose to run your script on all major platforms: Ubuntu, Windows and macOS.

Automating our rename/upload task couldn’t be simpler with GitHub Actions. You can follow along with our sample repository on GitHub: https://github.com/xlwings/release-excel-workbooks.

To activate GitHub Actions, all you need to do is create a yaml file within the following directory .github/workflows (you will need to create it in your Git repository). In our sample repo we call it main.yml:

The only two settings that you’ll need to customize for your own repository are asset_path and asset_name: Make sure to change mybook to the name of your actual Excel file that you want to release. And that’s really it!

After creating a new release, you can follow the progress of your pipeline by clicking on the Actions tab:

Click on Release Pipeline and you will get access to the detailed logs of each step (you can click on the arrow of each step to expand):

If you want to know what happens exactly, read on as we’re going through the yaml step-by-step:

GitHub has released a fantastic continuous integration/continuous deployment platform with a generous free offer. Easy things are easy to do so there’s no reason why you shouldn’t start using it today to automate your tasks (whatever they may be).

Do you want to email your spreadsheet to certain people upon release? You can do that. Or do you want it to be stored on a specific location on your shared drive? You can do that, too (but you’ll need to host the GitHub Actions runner yourself).

Keep in mind that GitHub Actions is just one example of a continuous integration/continuous deployment platform and the concepts shown will work exactly the same on all the other available platforms like GitLab, Bitbucket or Azure DevOps (but the syntax and setup will slightly differ).